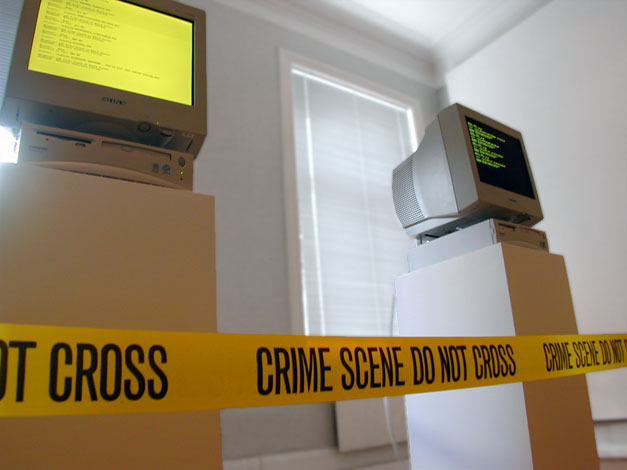 The digital software products of our time raise fundamental questions of intellectual property and copyright. These questions are raised and discussed in courthouses around the world and by free software movements but they are also an issue for much contemporary artistic production. Mogens Jacobsen's Crime Scene is fine example of the latter.
Crime Scene consists of a small peer-to-peer network of only 2 computers. Each computer hosts a selection of copyrighted material (commercial software, music and videos) on its disc drive. The computers run a program which execute the following series of operations:

Thus the swapping of files continues ad infinitum. The monitors show the negotiation between the computers and the progress of the copying. Filenames of the copied files are also shown.

Expensive commercial information is being swapped in this closed circuit network. The hypothetical value of the bits - and alleged criminal status of the actions - lies solemnly in the copyrighted status of the files. The files are never utilized in this network: The mp3 files are never played, Photoshop is never installed, not a single letter is written in MS Word.

The software is run as a console application - like a command line of a non-graphical OS. There is no distracting graphical user interface on the monitors. The focus of the work is not on the use but on actual act of copying of digital (im)material. The scene of the crime as the crime is being committed.

By confronting the audience with this act of copying on the line between the legal and the illegal Mogens Jacobsen forces the audience to reflect on the issues implicated in the act. Are they in fact witnessing a crime? And if they are, should they interrupt the digital copying physically?

Crime Scene does not try to answer these questions by reference to wither law or ideology. The work poses the questions within a meta-reflective aesthetic context where the line between the legal and the illegal can be challenged.